Mandla city in the state of Madhya Pradesh is primarily a tribal area having a rich & glorious history dating back to hundreds of years. Situated in the catchment area formed by river Narmada & its tributaries, the city has numerous places of historical importance like ancient forts & serene ghats constructed on the river bank. Prior to before 1500 A.D. the city of Mandla was known as Mahishmati Nagari, a city since then has witnessed the rule of many dynasties, shared their triumphs & losses and imbibed their traditions & cultures. Thus the historical places of Mandla attract people from far & wide who come to get a glimpse of the years gone by. 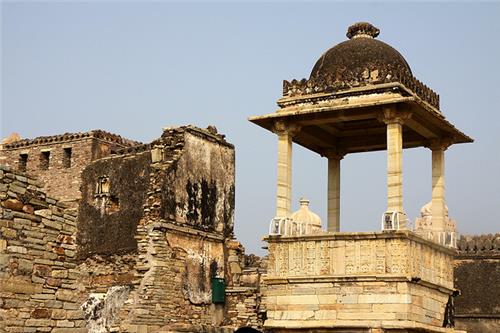 The city was once the capital of Gond, as per an inscription in the palace of Ramnagar, the rule of Gond - Rajput dynasty started in the 5th century with the taking over by Jadho Rai, a Rajput who married the daughter of an old Gond King. The Garha-Mandla kingdom was earlier a small territory which witnessed rapid expansion under the rule of Sangram Sah, the 47th king, in the year 1480. He captured territories like Narmada Valley, Bhopal, Sagar, Damoh and most of the Satpura hills.However the Garha-Mandla kings rule ended when Asaf Khan, the Mughal Viceroy, invaded the kingdom in 1564. The Gond Queen Rani Durgawati is said to have fought bravely against King Akbar to save her kingdom; The Mughals acquired immense booty, including thousands of elephants from this victory. At the beginning of the year 1742 the Peshwas invaded Mandla and extracted chauth (tribute) from the region. Finally, with the end of Gond-Rajput dynasty, Mandla was annexed to the Maratha government of Sagar in the year 1781.It is said that during the Gond rule the Mandla district was quiet well-off & populated, but successive oppression & loots by the various kings, especially the Sagar ruler, Vasudeo Pandit had left the district ruined and depopulated.

After the end of the Third Anglo-Maratha War in 1818, Mandla came under the British rule. The Britisher’s faced stiff resistance from the Maratha garrison in the fort but were forcefully taken over by General Marshall. Rani Avanti Bai of Ramnagar also put a strong fight against the British to save her kingdom, but eventually Mandla and the neighbouring districts became a part of the Saugor & Nerbudda territories of British India. The people of the district showed active participation during the Revolt of 1857 when chiefs of Ramgarh, Shahpura & Sohagpur joined the revolt and also took with them their Gond retainers. In the year Saugor & Nerbudda Territories, including Mandla District came under the new Central Provinces till the time Mandla Town was made a municipality in 1867.

The Maratha wall was formed during the Peshwa rule was destroyed in the early 20th century. The Britishers developed the area and opened an English Middle School, Girls' & Branch Schools, a Sanskrit school, a branch of the Church Missionary Society some dispensaries including mission & police hospitals and a veterinary dispensary here. The region essayed a great role in the freedom struggle of the country; and people from all works of life joined the movement and made great sacrifices to attain independence.

After gaining independence Mandla beame a part of Madhya Pradesh State of Central India; and presently comprises of nearly 9 blocks, 6 Tehsils and 1247 villages. Since then the city has shown considerable progress in the areas of socio-economic growth. Forming a rugged high table-land in the eastern part of the Satpura hills, it has numerous streams flowing through the region and is endowed with dense green forests. The Municipal Corporation takes care of the day-to-day administration of the city.

Comments / Discussion Board - History of Mandla